Write on: Vision this... 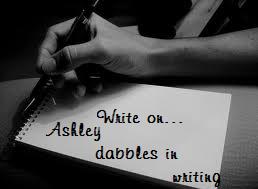 Here's a little bit of what I've been trying to work on. Sadly, I haven't done much on it.
Outline:
Kaelyn always knew she was different from the first “vision” she had of a bird hitting a 18 wheeler truck at age two while she pointed out the car window saying SPLAT to that day 5 years ago (her birthday) when she arrived to find police officers in her home, and her dad on the couch crying for the first time in her life.

She maybe able to see the future, to see people’s fates, but sometimes that’s not a good thing, and while knowing a persons fate is easy, it’s forgetting that fate that’s truly hard.

“If I knew that it would turn out to be the “happily ever after” ending it wouldn’t be as bad, but knowing they never stand a chance well it pretty much sucks. Still, I want to save them, I believe I can save them, I have to save them. I can’t really explain why I see what I see. but I’m willing to learn.”

She can’t turn it on and off, and soon she’ll learn that she REALLY can’t save them.
Question is how far is she willing to go and how much is she willing to lose before everything seemingly turns out alright…if in fact it does at all.


My mom used to always tell me that what I could do was a gift, but honestly I didn’t see it that way. People always get hurt. How is seeing someone get hurt a gift? I can’t change the outcome. There’s really no rhyme or reason for them. You would think that since I don’t know these people that it wouldn’t even matter. What do I care if some thuggish looking boy meets his end while he shoots up? Or how about the older guy who is accused of sexually abusing his child, and he has so much guilt he kills himself? The prostitute who is beaten in the alley way just because she dresses sluttish? Did they deserve to meet their ends just because they did bad things in their lives? Should I care more if it is a single mother of 2, working two jobs, who gets hit by a drunk driver who lives? How about a little boy who has leukemia and the doctors only give him a month to live? Or those people who just happen to be in the wrong places at the wrong times? Do I give more attention to them. No, because there’s nothing I can do for any of them. Those lives are on a path. They were put in those situations for a reason. I can’t intervene. These are the things I see. Why? Your answer is as good as mine.

“When I was younger I was frequently visited by dreams (nightmares if you will) of  death, people dying, people who I’ve never met before. It was scary and little kids shouldn’t have to see what I saw much less dream about it.

When my mom was alive I was able to go to her with these nightmares. At first she just thought I had an overactive imagination. An overactive imagination is believing you have a vampire boyfriend, or that your cat is secretly plotting to take over the world (all of which are plots to movies that the said child may have seen.) What wasn’t normal was that a 5 year old would tell her mom that she dreamed a little boy fell into a pool, and he never came back up. That she could feel the last breathes he took and could smell the high concentration of chlorine. Yeah, that got the child a trip to the nice lady with the cushy couch and games, and colorful paintings on the wall. So for an hour and a half I spent playing with Ms. Caylor, we colored together, and she always took an interest in my drawings. At the time I just thought she liked them, but now I know it was a way for her to study me This was something that happened every Wednesday. I remember the ending bell at school would mean that my mom would come pick me up. Any other day I would have gone home with Mrs. Hill and Kyah because my mom always worked late. Wednesdays were my day. As soon as I got in the car mom would ask, “Who’d you meet today?“ I knew what she meant was “Did you have any of those daydreams you’re prone to having. So I know whether or not to expect a call from your teacher.” She didn’t like to admit that maybe I was a little strange, different from the other kids my age. (Sometimes it’s good to be different though. I learned that the hard way.) At first I would tell her. I would explain to her what I saw when I spaced out. I loved that she took an interest in me. You’re probably thinking that’s what mothers are suppose to do right?  Not my mom. Once I was old enough for Pre-school I became invisible. (which would have been fine if I wasn’t say two years old.)  It’s as if her work became her sole purpose in life. So what about my dad where was he. Let’s just say he spent a lot of his time locked in his office. I never really understood why my parents had to be so different from everyone else’s. What did my parents go through to make them hate me and not want to spend time with me? I would come to find out later on that it wasn’t me they were trying to stay away from, but the ghost of someone else because being with me meant they had to deal with what happened all those years ago when I was a baby. So where did that leave me? In the hands of our house-keeper (and apparently my new nanny) Anita, she was actually a sweet lady, and I grew to love her as a mother.

This was something I grew accustom to. These flashbacks, daydreams whatever you want to call them. I guess it was my sub-consciences way of telling me I needed to remember the good and bad, but lately it seems that everything I remembered, or would pop in as visions was focusing on the bad. This is what I hated about my “gift” I couldn’t control it. When I was younger it seemed that specific times in my life it would just go away for what I thought would be forever, and then wham…they were back.

Email ThisBlogThis!Share to TwitterShare to Facebook
Labels: my writing, vision this

Signup for my Feature

I'll be having a giveaway for Julie Kagawa's new book The Immortal Rules book one of the Blood of Eden series. sometime in the next month or so. (More than likely it'll be after I finish reading my copy) It will come from the publisher. More details to come. :) (Note: I know I haven't sent out the giveaways I did in December and I have them all packaged and ready to be taking to the post office and I will get to it and send the winners an email when I do. I'm sorry I've had some stuff going on as you can tell from lack of posts.)

Ashley @ Bookaholics Anonymous
Ashley aka AngelicNytmare is a 25 year old who enjoys reading, writing, designing, and other stuff. Visit her other sites to learn more about her, book addiction, writing, Designs, or just the general-ness of life.
Want me to review something check first--> Review Policy