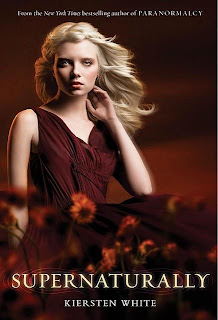 PUBLISHED: July 26, 2011
PUBLISHER: HarperTeens
PAGES: 336
SERIES/STAND ALONE: Series-Book 2 (Paranormalcy #1, Endlessly #3)
SOURCE: Bought
CHALLENGES: None
OUTLINE:
Evie finally has the normal life she’s always longed for. But she’s shocked to discover that being ordinary can be . . . kind of boring. Just when Evie starts to long for her days at the International Paranormal Containment Agency, she’s given a chance to work for them again. Desperate for a break from all the normalcy, she agrees.

But as one disastrous mission leads to another, Evie starts to wonder if she made the right choice. And when Evie’s faerie ex-boyfriend Reth appears with devastating revelations about her past, she discovers that there’s a battle brewing between the faerie courts that could throw the whole supernatural world into chaos. The prize in question? Evie herself.

So much for normal.
MY THOUGHTS:
Going into this I thought I would love it just as much as Paranormalcy, but sadly it fell a little short for me. Don't get me wrong I still enjoyed it, it just didn't have that spark. As much as I enjoyed the humor in the first one I didn't see to much of it here. I think it's because this book took a different turn. The first one focused more on Evie and her time at IPCA where as Supernaturally focuses more on what happens when she becomes "normal" or as close to normal as Evie can be. Supernaturally focuses on who/what Evie actually is and we learn more about where she came from, why she is the way she is, and more.

In the second book Evie seems a little more selfish/whiny. I still enjoy her as a character it's just I wish she would have been a little more stronger and not worry so much about what others thought. Focus on what was good in her life her boyfriend, her friend,  her new school life.

Lend I absolutely love his character in both books actually. He seems to genuinely care about Evie, and it kind of irritated me when Evie would act the way she did towars him. I mean you have an awesome boyfriend why waste that with worrying about other retarded things.

Jack is the newest character in the series and he's a little younger then Evie. At times I really liked his character. He was fun, free-spirited, but then you have that mystery to him. Who is he really does he have something to hide?

I have to admit at first I wasn't sure what was going on , and who was causing the problems. A little later on in the book I began to wonder if a certain character was it, and it was.

All in all I would say if you read and enjoyed Paranormalcy then read Supernaturally because it is different from it's other one. I definitely can't wait to read the ending to Evie's story. Endlessly comes out next year.
Posted by Ashley @ Bookaholics Anonymous at 8:10 PM

Signup for my Feature

I'll be having a giveaway for Julie Kagawa's new book The Immortal Rules book one of the Blood of Eden series. sometime in the next month or so. (More than likely it'll be after I finish reading my copy) It will come from the publisher. More details to come. :) (Note: I know I haven't sent out the giveaways I did in December and I have them all packaged and ready to be taking to the post office and I will get to it and send the winners an email when I do. I'm sorry I've had some stuff going on as you can tell from lack of posts.)

Ashley @ Bookaholics Anonymous
Ashley aka AngelicNytmare is a 25 year old who enjoys reading, writing, designing, and other stuff. Visit her other sites to learn more about her, book addiction, writing, Designs, or just the general-ness of life.
Want me to review something check first--> Review Policy